Skip to content
Menu
Close
Various sources, including NJBiz, have reported that Mayor Fulop and Jersey City are pushing forward an ordinance largely prohibiting chain businesses, i.e., any business that has 10 or more locations within 300 miles from the City. If challenged, will the ordinance pass legal muster? Arguably not.

Generally land use ordinances must advance the purposes of zoning. Anti-competitive ordinances have historically and repeatedly been stricken by the Courts in New Jersey, for instance, distance regulations between competing businesses (e.g., a zoning ordinance that would purport to require at least 1500 feet between fast food restaurants or other uses otherwise permitted in the zoning district). Thus, in this instance, a chain located on the West Coast, such as In-N-Out Burger (whom ironically said it would not expand to the East Coast due to supply chain challenges) could locate in Jersey City, but Macy’s, Starbucks, Dunkin Donuts, Home Depot, and numerous other well-known chains would be prohibited from opening in most of Jersey City (excepting some areas of the waterfront).

Mayor Fulop asserts that the restrictions will keep the City “livable and desirable” and allow the City to “reflect diversity and spur creativity.” If challenged, the City and Mayor will have to convince the court that these considerations are valid land use objectives advancing the purposes of zoning. Cities such as San Francisco, California, and Nantucket Massachusetts, have enacted similar ordinances, but the authority for the Jersey City ordinance must pass muster under New Jersey’s Municipal Land Use Law, N.J.S.A. 40:55D-1 et seq., in order to survive a challenge.

This is definitely an issue we’re going to keep an eye on and will continue to update you as it develops. 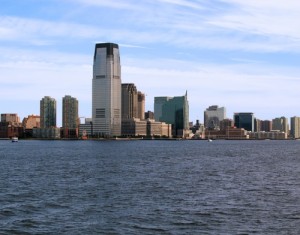 Colder than average temperatures and heavy snow in much of the U.S. failed to keep February home buyers away. Signed contracts to buy existing homes rose 3.1 percent from January, according to the National Association of Realtors (NAR).

The Realtors’ so-called “Pending Home Sales Index” is 12 percent higher than one year ago, and is at its highest level since June, 2013.

“Pending sales showed solid gains last month, driven by a steadily-improving labor market, mortgage rates hovering around 4 percent and the likelihood of more renters looking to hedge against increasing rents,” said Lawrence Yun, chief economist for the NAR. “These factors bode well for the prospect of an uptick in sales in coming months. However, the underlying obstacle—especially for first-time buyers—continues to be the depressed level of homes available for sale.”