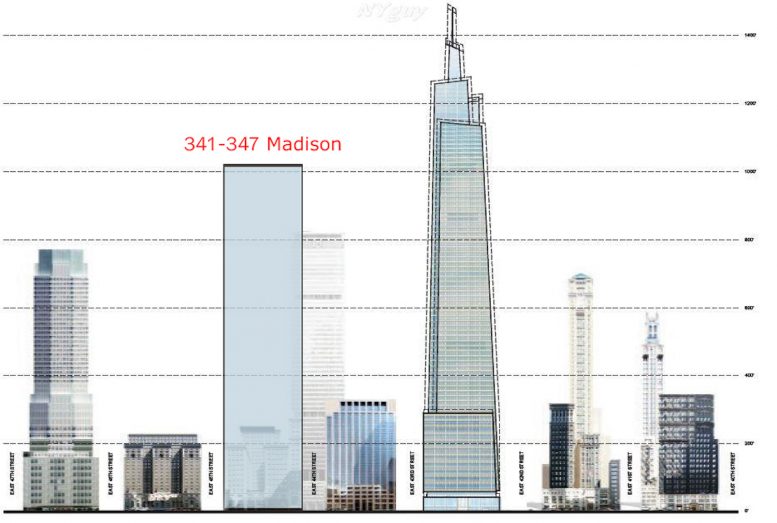 Plans for 343 Madison Avenue in Midtown East unveil the substantial size and scope of the supertall to take the place of the former Metropolitan Transportation Authority (MTA) headquarters. Boston Properties is developing the project that would comprise 925,630 square feet and rise 1,050 feet tall, with Class A office space above ground-floor retail. The building would yield 5,357 square feet of retail space on the ground floor, 832,613 square feet of commercial office space above, and 84,593 square feet of dedicated mechanical space. The tower would sit on a podium 301 feet tall.

Schematics in the YIMBY Forum show how the proposed superstructure will impact the New York City skyline.

The project site, known as located at 341-347 Madison Avenue, has approximately 200 feet of frontage along Madison Avenue and 125 feet of frontage along both East 44th and 45th Streets. It sits in a predominantly commercial area surrounded by high-rise office buildings, retail and hotels due to its proximity to Grand Central Terminal. According to the drafted Environmental Impact Statement, the building would also offer pedestrian access to Grand Central Terminal and the LIRR East Side Access concourse, currently in the works. It would also include a 3,067-square-foot easement for the East Side Access.

343 Madison Avenue is expected to be completed by 2026, with excavation work beginning in 2022. Demolition would take place from October 2020 to November 2021.

Invictus Real Estate Partners and Fortis Investment Group are combining for a series of ventures into New Jersey mixed use and commercial real estate. Eric Scheffler of Invictus and Dom Marino of Fortis have worked out an arrangement wherein Fortis will take the lead in the acquisition and development process while Invictus provides needed funding and other valuable parts of its evergrowing assets and organization.

Marino has indicated that the partnership will be flexible enough to move on the swiftly changing and dynamic landscape of the New Jersey real estate market. ” With our close to the street resources and Invictisus’ financial market saavy and fluidity our relationship should prove highly worthwhile for both parties.” Mr. Scheffler was not available for comment at the time of this article but will submit a release as soon as possible.

Construction is about to go vertical at 450 Eleventh Avenue, a 487-foot-tall, 531-room hotel from Starwood Hotels & Resorts Worldwide in Hudson Yards. Designed by DSM Design Group and developed by Marx Development Group, the 43-story tower is one of several new high-rise structures sprouting up around the Jacob K. Javits Center.

Recent photos show the state of progress at the site, which is located between West 36th and 37th Streets. Since YIMBY’s last update in late March, the reinforced concrete slab has been fully formed and settled, and formation of the superstructure appears to be imminent. Steel rebar can be seen protruding along the southern edge of the property and around the street-level floor plate, and will soon receive the first concrete pour for the building’s columns and walls, as well as within confines of the street-level floor plate. The construction crane should also be assembled in the coming weeks.

450 Eleventh Avenue will bring a unique, striking design to the Hudson Yards district. Renderings show a lively, modern massing composed of an undulating array of glass boxes. Resembling a stack of Rubik’s Cubes, the glass-clad structure subtly twists as it rises to the flat roof parapet. The design scheme also incorporates a number of irregular cuts and angles in the surfaces of its cubic components, which should create interesting reflections and lighting patterns throughout the course of the day.

YIMBY last reported that 450 Eleventh Avenue is expected to be finished in the fall of 2022. Larry Silverstein of Silverstein Properties and George Kaufman of Kaufman Astoria Studios with renderings of the project (Getty, ODA)

A team of developers is planning a $2 billion, 2.7 million-square-foot mixed-use development in Astoria.

The development will cover five blocks at the intersection of Steinway Street and 35th Avenue and will include 2,700 units of mixed-income housing, the developers announced. Of those units, 700 will be set aside as affordable housing. The project will also have 200,000 square feet of retail and 250,000 square feet of space set aside for what the developers called the city’s creative industries and other small businesses.

“This is a time when people desperately need jobs, and this project will serve as an enormously important stimulus for Astoria and New York City,” Silverstein Properties chairman Larry Silverstein said.

The development will also include 2 acres of open space, a movie theater, a grocery store, community health facilities and dedicated senior housing.ADVERTISEMENT

Silverstein has spent the past two years assembling parcels at the development site, which is zoned for low-density manufacturing, meaning the development team will need a rezoning to move forward with their plans.

The developers said they plan to begin the city’s public review process next year, with construction slated to kick off in 2023 and the first phase slated to open two years later.