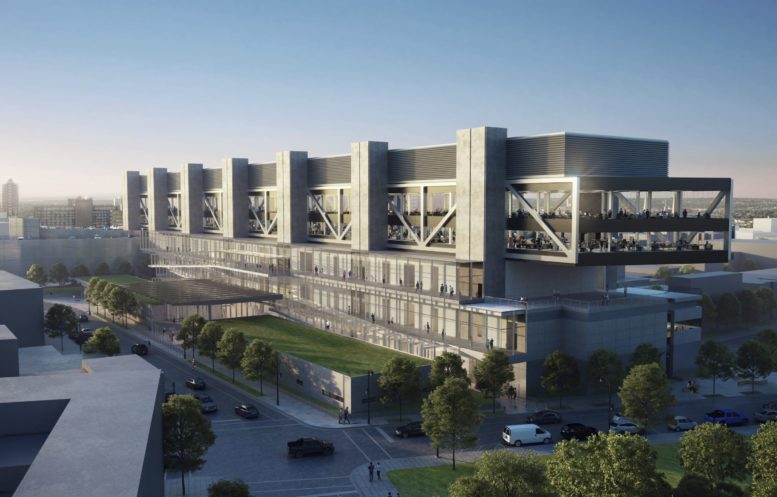 Construction is rising on the Frank J. Guarini Justice Complex, a massive new government building at 595 Newark Avenue in the Journal Square neighborhood of Jersey City, New Jersey. Designed by bridging architect Rafael Vinoly and design-builder Terminal Construction Corporation, the five-story structure will yield 24 courtrooms, jury assembly spaces, and new offices for the Hudson County prosecutor, the surrogate, and the sheriff, among others. The $345 million development will also house a 75-seat public food court, a self-help law library, a children’s play area, training spaces, and a 459-space parking garage. MAST Construction Services Inc. is the general contractor for the facility, which is rising from an extensive plot bound by Central Avenue to the west, Route 139 to the north, Oakland Avenue to the east, and Newark Avenue to the south. The developers are aiming for LEED Silver certification.

Recent photos show the towering concrete columns topped out around the perimeter of the site and the steel superstructure rising within.

From certain angles, the development appears almost like an abstract art installation towering over the nearby homes and commercial buildings. The land on which the building rests had to be cleared of several low-rise structures and consolidated to form one mega parcel. This involved the removal of Cook Street and the widening of Oakland Avenue into a two-way corridor for increased vehicular usage.

The Frank J. Guarini Justice Complex will replace the outdated Administration Building, which will eventually be demolished and replaced by a park using funds from Hudson County.

Renderings below from the Hudson County Improvement Authority provide further perspectives of the Frank J. Guarini Justice Complex and its lateral build defined by a multi-story system of diagonal trusses. New landscaping and tree-lined sidewalks will surround the main western entrance to the property.

The Frank J. Guarini Justice Complex is anticipated to be finished sometime next year.