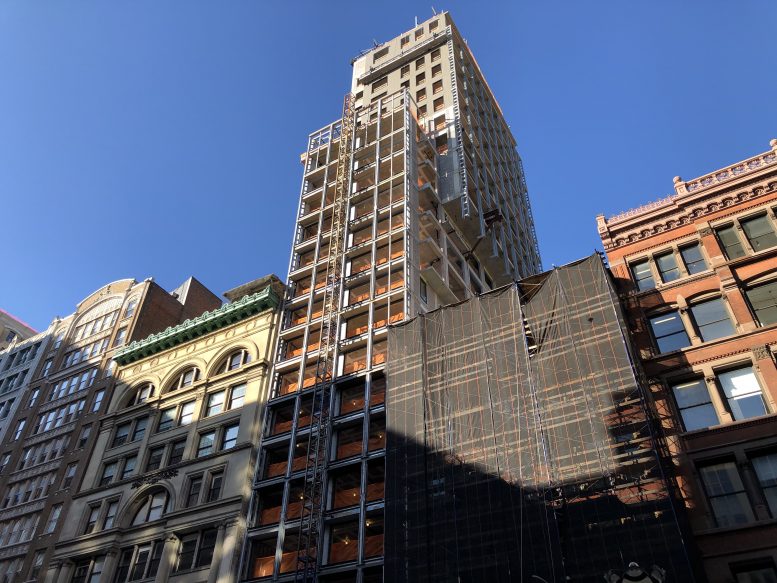 Curtain wall work is progressing at 39 West 23rd Street, a 24-story residential project in the Flatiron District. Designed by COOKFOX Architects and developed by Anbau Enterprises, the development consists of two structures separated by an internal courtyard.

Recent photos show the state of exterior work on the building, which is located on the northern side of West 23rd Street between Fifth Avenue and Sixth Avenue. One of the most noticeable places of progress is on the western lot line wall, where thin, narrowly spaced horizontal bars subtly protrude, adding an interesting texture to the façade.

The other more recent area of concentrated work is on the bottom floor of the southern profile, where workers were spotted installing the first set of warm-colored stone panels around the metal perimeter framework above the ground floor.

The metal railings, and overhanging shrubbery as part of the more subtle design aspects of 39 West 23rd Street have yet to go in. Below we see the southern elevation awaiting to be externally enclosed.

The following renderings depict the finished look of the project.

Workers have painted part of the walls above the main setback toward the top floors. The earth-toned color appears to be the final treatment for this portion of 39 West 23rd Street.

Meanwhile, fenestration work is progressing on the the upper levels of the eastern profile that cantilevers over its abutting low-rise neighbor. We expect this area to emulate the same architectural design as the front of the building.

The development will span a total of 118,00 square feet and yield 44 units. Four residences will be designated as affordable rentals. Residential layouts vary between single-floor homes and duplexes, including some with their own private outdoor terraces. Amenities include a fitness center, a residential lounge, a children’s playroom, a communal outdoor landscaped terrace, and a 25-car garage below street level.

A definite completion date for 39 West 23rd Street is unclear, but sometime within 2021 is likely.