3 reasons why China had to devalue: Deutsche 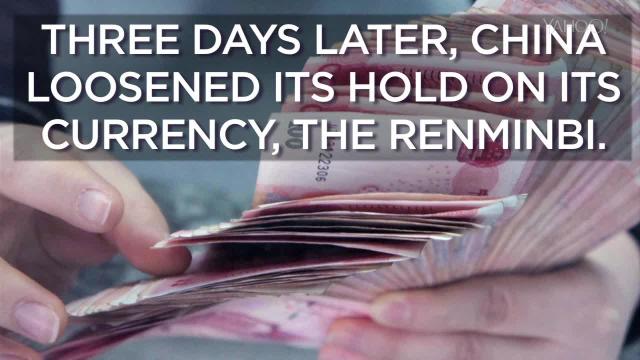 Bad economic news just prior may be part of the reason why China took the steps it did on its currency, the renminbi. On August 8, China reported its exports fell 8.3% in July. Three days later, China loosened its hold on the currency, causing the yuan’s value to drop immediately.

According to Luke Oliver, U.S. Head of Capital Markets at Deutsche X-trackers, there are three reasons why China needed to devalue its currency.

“One might be the fact that its exports have become less competitive,” said Oliver. “Over the last year, we’ve seen that… China against a basket of currencies has actually strengthened 12% over the last year. That’s a pretty big headwind for Chinese exports.”

While goods are having a tougher time leaving China, it’s a different story with money, notes Oliver, whose team is responsible for three China ETFs in the U.S. with a combined $790 million in assets.

“Secondly, the strong Chinese renminbi seems to encourage outflows from China,” Oliver said. “We’ve seen capital outflows estimated to be about $35 billion per month this year. So perhaps weakening the renminbi will stem that outflow.”

A third reason for devaluation may also have to do with giving China a leading place among global currencies.

China wants the yuan to be part of the International Monetary Fund’s Special Drawing Rights (SDR) basket. Right now, just the U.S. dollar, the euro, the British pound and Japanese yen are in the SDR basket. Adding the yuan to the SDR basket would make China’s renminbi a global reserve currency. But the IMF wants China’s yuan to be more in line with the supply and demand forces of the markets.

“China is trying to work towards the liberalization of its currency that the IMF is looking for as it starts to consider whether China should be part of the SDR,” said Oliver.

He sees the devaluation benefiting Chinese equities in the long-term. In the past week, the Shanghai Composite Index (000001.SS) gained nearly 5%, though it is still 23% off from its all-time high of 5,166.35 set two months ago.

“Anything that moves the currency back towards fair market value is a good thing,” said Oliver. “This is all representative of China supporting its economy by taking the action it needs to take. I think for Chinese stocks and Chinese investments this could be a good move.”