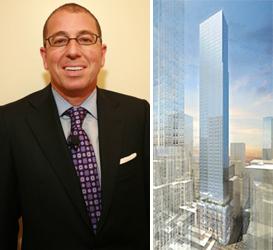 Joseph Sitt’s Thor Equities sold a Midtown development site at 520 Fifth Avenue to Ceruzzi Properties and an unidentified Chinese partner for $275 million, after purchasing it for $150 million in 2011. Ceruzzi, a Fairfield, Conn.-based real estate investor, plans to follow through with Sitt’s plans for a 71-story residential, hotel and retail tower on the site, according to Bloomberg. The plot, which has approximately 300,000 buildable square feet, sits between 43rd and 44th streets and has been vacant since Sitt demolished two prewar buildings that were there when he purchased the site. In December, Sitt filed a permit application for the residential-hotel tower. He put the site up for sale earlier this year and was initially seeking $350 million. A team of HFF brokers represented Sitt in the deal. [Bloomberg] — Tess Hofmann – See more at: