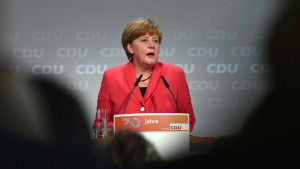 German Chancellor Angela Merkel and French President Francois Hollande signaled they’ve reached the limits of their ability to safeguard Greece, offering the government no further concessions to step back from the brink.

The leaders of Europe’s two biggest economies gave little reason for hope to Greeks who awoke Monday to find their banks shut and capital controls imposed as the government took steps to avert the collapse of its financial system. Global stocks and Greek bonds tumbled as Prime Minister Alexis Tsipras’s decision to hold a July 5 referendum on the terms attached to rescue aid increased the risk that Greece will exit the euro.

Merkel and Hollande, who have repeatedly said they want to hold the euro together, gave the Greek premier no leeway after he broke off negotiations over future bailout aid. Hollande suggested the referendum would determine whether Greece could stay in the 19-nation euro area, while Merkel said Europe’s credibility was at stake with its response.

“If the euro fails, Europe will fail,” Merkel said in a speech in Berlin. “That’s why we have to fight for these principles. We could maybe set them aside in the short term. We could maybe say we’ll just give in. But I say: in the medium and long term, we will suffer damage that way.”

Tsipras, who promised to return “dignity” to the people and reject budget cuts imposed by creditors, appealed for “calm” after weekend-long queues at ATMs and gas stations.

The bank controls followed a weekend of turmoil that started with Tsipras’s shock announcement late Friday of a July 5 referendum on austerity. People rushed to line up at ATMs and gas stations after the breakdown of aid talks late Friday and a European Central Bank decision to freeze its lifeline to Greek banks. Greece is the second euro-area country to impose capital controls after Cyprus in 2013.

“In the coming days, what’s needed is patience and composure,” Tsipras said on television. “The bank deposits of the Greek people are fully secure. The same applies to the payment of wages and pensions — they are also guaranteed.”

Merkel spoke to President Barack Obama on Sunday, agreeing on the importance of keeping Greece in the euro.

Hollande said that while it is the sovereign right of Greece to hold the referendum, “what’s at stake is serious,” he told reporters in Paris on Monday after an emergency session of ministers to discuss Greece.

“It’s about knowing if the Greek people want to stay in the euro zone,” he said. “That is their place, in my eyes, but it’s up to them to decide. Or they take the risk of leaving.”

Both Hollande and Merkel, in their public responses to the developments, stressed the joint efforts made since Greece first called for international aid in 2010 to halt the threat of contagion.

“Europe can cope with such crises much, much better today because it has taken precautions,” Merkel said.