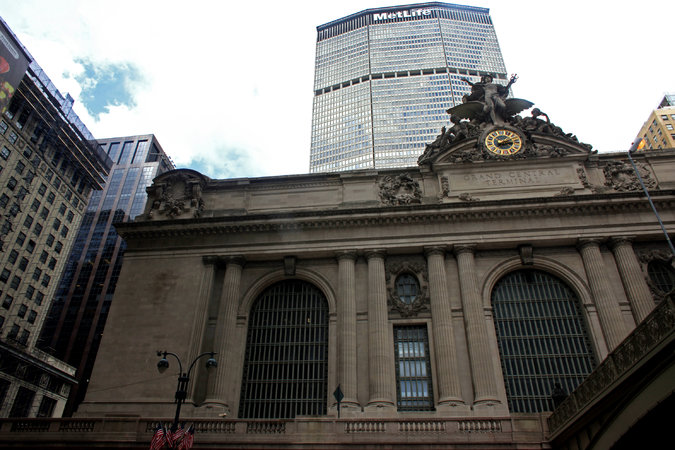 Andrew S. Penson, who bought Grand Central Terminal in 2006, contends that he is being deprived of his property rights.

When he bought Grand Central Terminal nine years ago, Andrew S. Penson figured that the unused development rights, or air rights, over the country’s busiest train station were worth a fortune.

The soft-spoken real estate investor, however, failed to come to terms with a developer next door who needed them, or to sell even one square foot of more than a million square feet of those rights.

On Monday, Mr. Penson filed a $1.1 billion lawsuit in United States District Court in Manhattan that argued that the administration of Mayor Bill de Blasio, a Democrat, the City Council and the developer, SL Green Realty Corporation, had deprived him of his property rights when the city gave SL Green permission to build a 1,501-foot tall office tower, without having to buy any air rights from him.

The lawsuit involves complex questions of zoning, constitutional law, politics and potential conflicts of interest, but it boils down to what always matters most in New York real estate: millions and millions of dollars.

It is the latest chapter in a dispute that has festered for years, with supporters of Mr. Penson describing SL Green as politically connected, while critics of Mr. Penson dismiss him as a speculator.

The city designated Grand Central as a landmark in 1967, partly to block a proposed office tower that would have risen overhead.

The designation, the city argued in United States Supreme Court, was not an unconstitutional taking of land because the unused development rights over the terminal could be sold to nearby developers.

But Mr. Penson’s lawyers argued in the suit that by granting SL Green the rights to build a tower “for free” that is twice as big as had been permitted by zoning, the de Blasio administration and City Council had rendered Grand Central’s air rights “worthless.”

“Taking the property of a private citizen for the benefit of another private citizen without any public purpose,” the lawsuit contended, is a violation of the Fifth Amendment.

Therefore, “plaintiffs are entitled to be paid ‘just compensation’ by the city for the value” of the air rights, the lawsuit stated.

But SL Green and city officials pointed out that the developer had to commit to approximately $220 million in improvements to the crowded subway platforms and stairwells below Grand Central in exchange for the right to build the oversized tower. Construction of the tower, known as 1 Vanderbilt, has yet to start.

Jonathan Rose, a spokesman for SL Green, said the project would not be “sidetracked by frivolous litigation.”

One Vanderbilt has received broad support within the city, Mr. Rose said, “because of the project’s unprecedented commitment to improving the commutes for millions of New Yorkers and bringing state of the art office space to East Midtown.”

City officials declined to comment on the suit because they had not seen it. But Wiley Norvell, a spokesman for the mayor, said the rezoning and project were “critical” to the city’s future. An investment group led by Mr. Penson bought Grand Central for about $80 million in 2006. The terminal itself had little value, the lawsuit on Monday contended, because the building was under a long-term lease to the Metropolitan Transportation Authority for a relatively modest rent that declines over time.

Mr. Penson was betting, however, that the 1.2 million square feet of air rights connected to the terminal, which he bought for less than $60 a square foot, could generate hundreds of millions of dollars in a real estate boom.

The lawsuit contended that the air rights were worth $880 per square foot, a not-unheard-of sum for luxury residential projects, but one that most commercial developers believed was prohibitive for an office building.

In 2012, the administration of Mayor Michael R. Bloomberg, a political independent, proposed rezoning the area around Grand Central for taller office towers.

Under the proposal, which was unsuccessful, developers could buy additional development rights from the city or from district property owners, like Mr. Penson.

Mr. Penson’s secret negotiations with SL Green to sell his air rights collapsed after the developer concluded his price was too high.

This year, Mr. de Blasio and the City Council approved a plan to rezone a smaller section of the district known as Vanderbilt corridor. SL Green was allowed to build a 65-story office tower on the block bound by Vanderbilt and Madison Avenues, between 42nd and 43rd Streets, in exchange for the transit work beneath Grand Central.