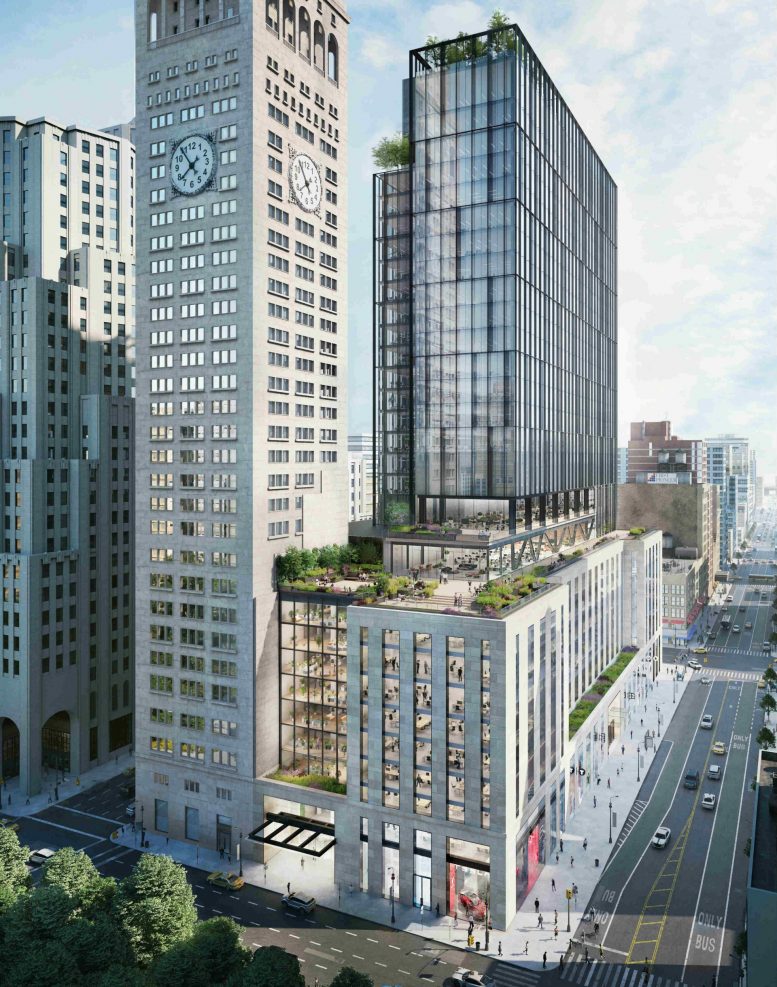 Construction is rising on One Madison Avenue, a 27-story commercial expansion in the Flatiron District. Designed by Kohn Pedersen Fox and developed by SL Green, the National Pension Service of Korea, and Hines, the project involves the gut renovation and expansion of a former eight-story structure and will yield 1.4 million square feet of office space. AECOM Tishman is the general contractor for the property, which occupies a full block bound by East 23rd and 24th Streets and Madison Avenue and Park Avenue South.

At the time of our last update in mid-June, the core for the tower expansion was just beginning to rise above the gutted podium. Since then, the reinforced concrete volume has risen steadily as work on the surrounding steel frame has begun to take shape. Based on the pace of progress, the core should top out before the end of the year, with the framing following shortly behind.

Two tower cranes are busily hoisting steel into place for the tower’s frame. Nearly all of the new windows are in place on the lower floors, arranged in a grid of vertical columns.

The new tower will yield 530,000 square feet with floor plates spanning up to 35,000 square feet each. The glass curtain wall will provide occupants with abundant natural light and panoramic views of Madison Square Park, the Flatiron Building, and the surrounding neighborhood. The tenth and 11th floors will feature 22-foot ceiling spans and provide access to an open-air rooftop deck. Additional outdoor terraces will sit atop the podium between Madison Avenue and Park Avenue South.

Office amenities at One Madison Avenue include a 15,000-square-foot artisanal food market, a 9,000-square-foot tenant lounge, a three-level fitness center, bicycle storage, and a 13,000-square-foot high-tech event space with a capacity of 800 people. The closest subways from the property are the R and W trains at the 23rd Street station to the west along Broadway, and the local 6 train to the west along Park Avenue South. It was last announced that IBM has signed on as the anchor tenant with plans to occupy 328,000 square feet across five floors.

One Madison Avenue is slated for completion by the end of November 2023.