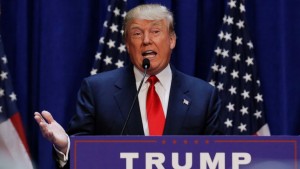 From the iconic Trump Tower in New York City, the Donald told his supporters he is “officially running for president of the United States.”

“We are going to make our country great again,” Trump, who turned 69 on Saturday, declared.

He added, “I will be the greatest jobs president that God ever created.”

In 2012, Trump launched a Presidential exploratory committee and visited key battleground states before bowing out in May 2011. This time though, Trump says he’s in it for the long haul; he plans to step away from the day to day management of The Trump Organization, and hand the reigns over to his children: Ivanka, Donald Jr, and Eric. He has also chosen to step aside from his hit reality show, “The Apprentice.”

“They all said, a lot of the pundits on television, well, Donald will never run, and one of the main reasons is he’s private and he’s probably not as successful as everybody thinks,” said Trump, who has never held public office before. “So I said to myself, you know, nobody is ever going to know unless I run because I’m really proud of my success.”

Reserved for Trump: Why the Donald Has His Own New Hampshire Parking Spot
Mr. Trump Goes to Washington: What The Donald Is Saying About 2016
We Played 2016 Presidential Word Association With Donald Trump And This Is What He Said

“Sadly the American dream is dead. But if I get elected president I will bring it back, bigger, and better, and stronger than ever before,” Trump said today to a packed room of supporters.

Last month, Trump told ABC’s Rick Klein, “Politicians are all talk, no action. They do a terrible job; a tremendous disservice to the country. And I know them better than anybody, and I love them – I think they’re great. It’s easy to make money with politicians. But, the fact is that it’s all talk and no action…and the country’s going to hell.”

Trump entered the real estate business started by his father, the late Fred C. Trump. Today, the kid from Queens is worth just over $9 billion, he claims. The name Trump can be found on countless Manhattan buildings along with hotels and golf courses across the globe.

Trump made many promises throughout his speech: “I would do various things very quickly. I would repeal and replace the big lie, Obamacare.”

“I would build a great wall, and nobody builds walls better than me believe me, and I’ll build them very inexpensively. I will build a great, great wall on our southern border, and I will have Mexico pay for that wall.”

“Nobody would be tougher on ISIS than Donald Trump, nobody.”

“I will stop Iran from getting nuclear weapons,” said Trump, who also said that he wouldn’t allow Secretary Kerry to spearhead the negotiations.

“And I promise I will never be in a bicycle race,” said Trump, referring to Sec. Kerry’s biking accident in May.

Trump has been married three times, his longest marriage to Ivana Zelnícková ended in divorce in 1992, he married actress Marla Maples a year later until they called it quits in 1999. His current wife, Melania Knauss married the Donald in 2005. Trump has three children from his first marriage – Donald Jr, Ivanka and Eric, a daughter Tiffany from his second marriage, and a son Barron with wife Melania. Ivanka had the pleasure of introducing her father, whose grand entrance to his announcement event was a ride down an escalator.

The Democrat National Committee responded to Trump’s announcement with a statement: “Today, Donald Trump became the second major Republican candidate to announce for president in two days. He adds some much-needed seriousness that has previously been lacking from the GOP field, and we look forward hearing more about his ideas for the nation.“

Real Estate Magnate Pushes for a Casino in North Jersey
Isn’t it rich? The Donald presents his financials